Sergei Parajanov (1924-1990) was a Transcaucasian Soviet film director. He is best known for four weird art films: Shadows of Forgotten Ancestors (1964), The Color of Pomegranates (1968), The Legend of the Surami Fortress (1984), and Ashik Kerib (1988). These movies are remarkable for their distinctive tableaux-style cinematography and their controversial use of ethnic and national symbols and imagery. For both of these, as well as for generally being an oddball and troublemaker, Parajanov was persecuted by Soviet officials and spent several years in prison. 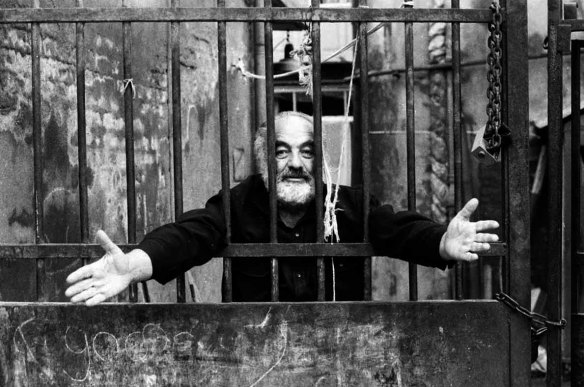 Parajanov is usually billed as being Armenian, and he too considered himself Armenian. But his true ethnicity is more complicated than that. He was born to a Russified Armenian family in Tiflis (Tbilisi). Russian was his first language, and on some accounts he knew Georgian better than Armenian. Parajanov apparently did not even know the correct Armenian form of his surname: he took it to have originally been Parajanian, when in fact a family birth certificate shows it to have been Parajaniants. To reflect his variegated ethnic background, I would instead describe him as Transcaucasian.

His first assignment after finishing film school was in Ukraine, where he lived for about the next fifteen years. For most of this time, he produced boilerplate genre movies, all of which he would disavow later in life. His breakthrough came in 1964 with the commercially and critically successful Shadows of Forgotten Ancestors (known in some countries as Horses of Fire), which was based on a novella by the Ukranian proto-nationalist writer Mykhailo Kotsiubynsky. 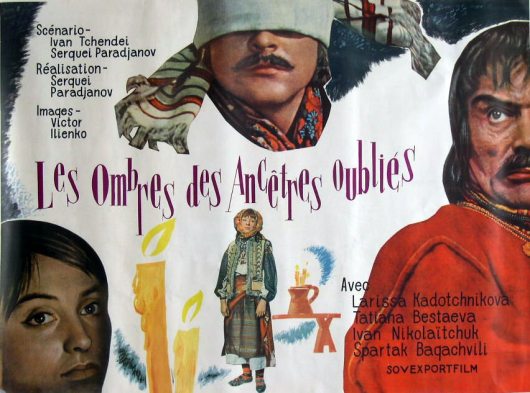 Shadows depicts life among the Hutsuls, an ethnic subgroup of Ukranians who live deep in the Carpathians. The whole movie is shot in the Hutsul dialect of Ukranian, and in fact it was one of the only movies released throughout the USSR without being dubbed over in Russian. Shadows became quite popular with Ukranian nationalists, and it thrust the rather apolitical Parajanov into the spotlight of Ukranian politics. Although he reportedly loved the attention, this would cause him to be placed under KGB surveillance, with dire consequences later on.

Parajanov’s next project barely got off the ground before it was shut down. Kyiv Frescoes purported (like most Soviet films of the mid 1960s) to be a commemoration of the twentieth anniversary of the end of the Great Patriotic War, but turned out to be a highly abstract experimental film with little connection to the war (or anything at all, really). Recognizing this, Soviet film higher-ups halted the production, though not before Parajanov was able to shoot a few minutes’ worth of screen tests (which have fortunately survived). 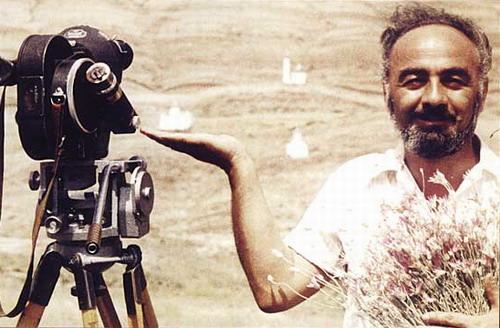 Parajanov evidently learned nothing from this experience, because his next project, The Color of Pomegranates, was also a highly abstract experimental film with little connection to the historical event it purported to depict. In this case, the historical event was the life of the eighteenth-century Armenian poet Sayat Nova. In fact, the movie was initially to be titled Sayat Nova, but the authorities deemed it too irrelevant to the actual story of the poet’s life and changed the name. They also removed all explicit references to Sayat Nova, changed all the title cards, and rearranged some of the scenes, all without Parajanov’s involvement. The Color of Pomegranates was not shown widely outside of Armenia, and only found its way out of the Soviet Union on a smuggled bootleg print. It has since become his signature film.

The Color of Pomegranates was released in 1968. He wouldn’t make another movie for twelve years. During that time he was blackballed from the film industry and arrested twice, spending a total of about five years in prison. The arrests were politically motivated, but the charges were for homosexuality, distribution of pornography (including nudie pens and playing cards of Western manufacture), and bribery. The Ukranian KGB had also prepared (but didn’t pursue) charges of theft and speculation in antiques, especially of old church objects Parajanov had allegedly stolen while filming Shadows of Forgotten Ancestors. While in prison, he wrote screenplays and made collages. Both of his sentences were reduced because of pressure from hotshot Western filmmakers like Federico Fellini and Jean-Luc Goddard. 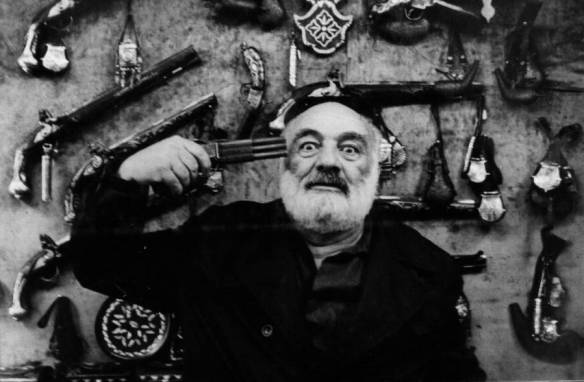 After his second release from prison, he directed two more major films, The Legend of the Surami Fortress and Ashik Kerib. While The Color of Pomegranates dealt primarily with Armenian culture, Surami Fortress and Ashik Kerib dealt, respectively, with Georgian and Azeri culture. Unfortunately, these movies were released just when nationalism was on the rise in the South Caucasus, and they were perceived to some extent as cultural intrusions by an (ostensible) Armenian.

In 1990, while working on his autobiographical film The Confession, Parajanov died in Yerevan. The Sergei Parajanov Museum opened there in 1991 (under somewhat messy circumstances). [See the UPDATE at the end of the post for more on the museum.] 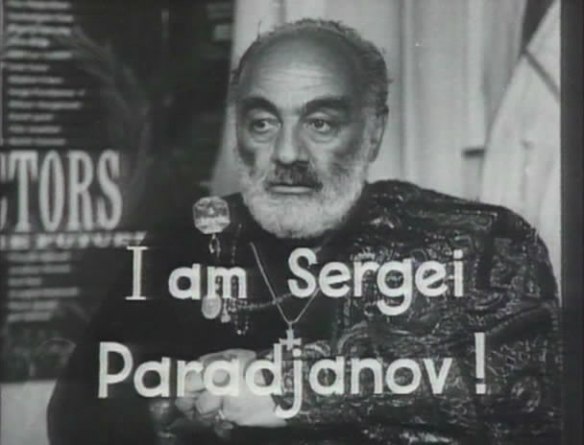 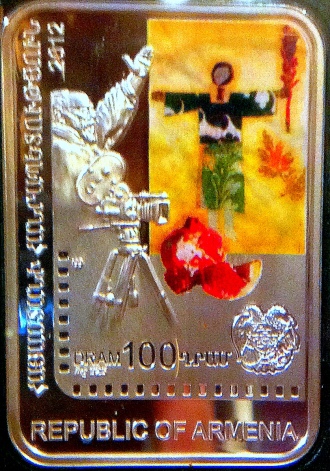 A 100 dram “coin” commemorating Parajanov (from the Pajanov Museum)

Much of this post is based on James Steffen‘s 2013 book The Cinema of Sergei Parajanov. If you have any interest in Parajanov (you would have to if you’ve read this far, right?) I recommend getting it. It covers every aspect of Parajanov’s movies: analysis of the films themselves, biographical and historical context, Parajanov’s sources and influences, and their reception inside and outside of the Soviet Union.

Note on spelling: As usual, the voiced postalveolar affricate, or the English j, is represented inconsistently. The Russian Параджанов is sometimes rendered Paradzhanov or Paradjanov (this one is used by the 2013 biopic), but thankfully it looks like the English standard is now Parajanov. In Armenian and Georgian we have Փարաջանով and ფარაჯანოვი. As I said earlier, there has been some dispute as to the Armenian form of the name (Parajanian, Փարաջանյան vs. Parajaniants, Փարաջանյանց). I am sure that I also once saw his surname in a Georgian form, either Parajanidze or Parajanishvili (ფარაჯანიძე or ფარაჯანიშვილი), but I can’t find any attestation of that now. I might be imagining the whole thing. 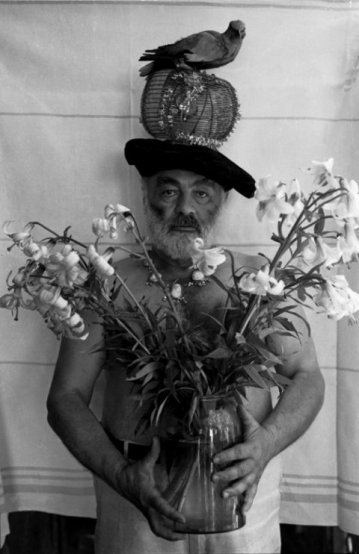 UPDATE 2/5/15: On my recent trip to Yerevan, I went to the Sergei Parajanov Museum. Surprisingly little of the museum has to do with Parajanov’s films. Instead, most of the pieces on display are the director’s various bizarre collages, paintings and sketches. These art objects are of intrinsic interest, and can be enjoyed by someone without any prior acquaintance with Parajanov. The Sergei Parajanov Museum was the best thing I saw in Yerevan, and I recommend it without reservation to anyone with any interest in any kind of art. 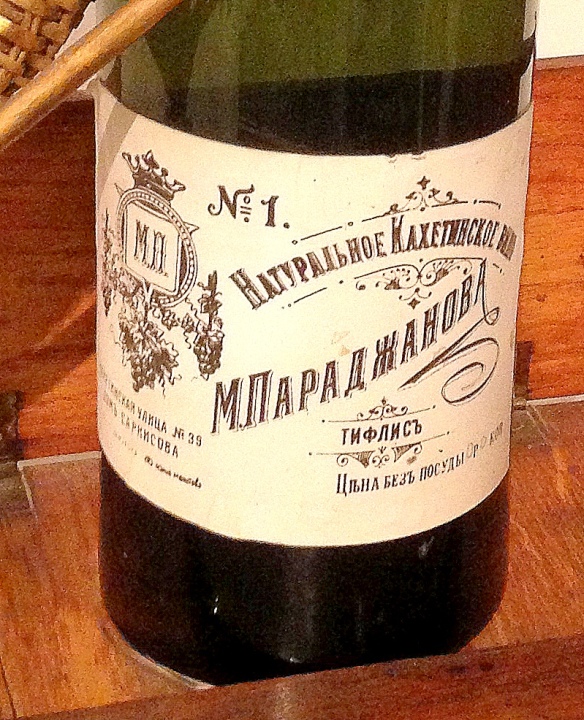 From the museum: “Our Wine”

Like most things in Yerevan, the Parajanov Museum is also dirt cheap. Entry for one is something like $3US, plus a little more if you want to take pictures (which, of course, I did). Even the guided tour wasn’t all the expensive, though I didn’t take it because I’m obviously pretty well-versed in my Parajanov already. The museum is also open seven days a week. Again, I highly recommend it. 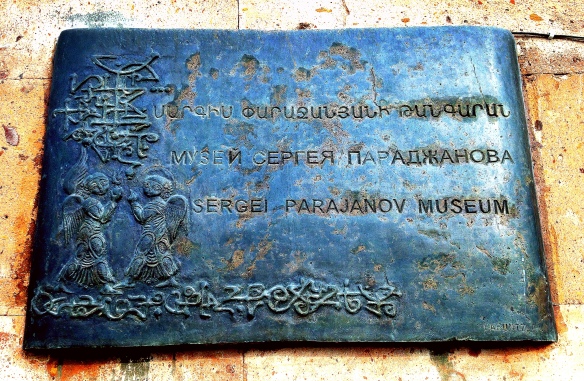